Murder's in the Heir on Water Street

11/24/2021
What do you get when you mix thirteen characters, nine suspects, one murder, and a ton of witty dialogue? An audience bursting with laughter, reaching for their phones to cast a vote for the culprit! After over a year's hiatus from in-person performances, our Water Street Players captivated audiences in Price Auditorium last weekend with a murderous breath of fresh heir filled with deception, melodrama, and comedic delights galore.

Written by Billy St. John and produced by special arrangement with Pioneer Drama Service, Inc., the play follows the time-tested plot structure for comedic murder mysteries that we all know and love. From Pioneer Drama Services, "Turn the game Clue into a play and you have the masterfully entertaining 'Murder’s in the Heir!’ Almost every character in this hilarious mystery has the weapon, opportunity, and motive to commit the unseen murder." But this play has some unique quirks that set it apart and draw the audience in.

The "director," played by Upper School Drama Director Mr. Ron Giddings, interrupts the play periodically to explain how the characters are related to one another (and the victim!), adding a frantic and hilarious element to the production. This character also encourages the crowd to scan the QR code on their program to vote for who they think the killer is at intermission. The second act is then determined by which character gets the most votes — every night of the performance had a different ending. This talented cast did a tremendous job bringing their eccentric characters to life as they wove a morbid (and hilarious) web of misdeeds and hijinks.

Scroll through the photos below! 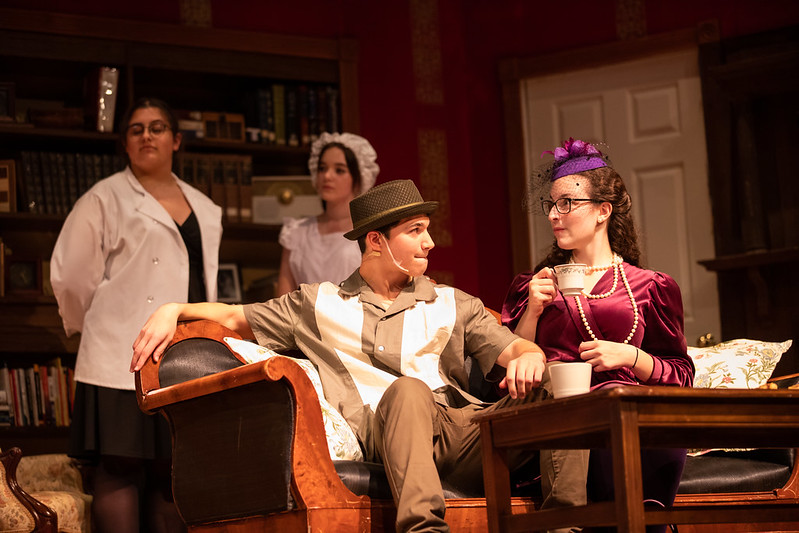 "Returning to Price Auditorium after being away for over a year has brought many challenges with it. As the pandemic wanes, I’ve been able to return to local theatres and see a few shows inside while wearing a mask, and it hasn’t felt the same. I felt disconnected as an audience member. The laughter stifled; the electricity somehow suffered. When I thought about selecting a show for the fall, I wanted to try to combat this feeling as much as possible. I also didn’t want to do anything too serious, since returning to in-person viewing is a celebration of the endurance and importance of theatre. I decided on the downright silly Murder’s in the Heir, mostly because of its very 'live' feel, involving the audience directly, as you vote for how the play will end, choosing one of NINE different endings, making the whole show feel interactive, re-forming the bond between actors and audience. It’s been great fun, and the cast and I have laughed a lot." — Mr. Ron Giddings